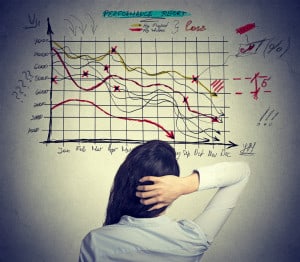 The U.S. economy’s sluggish start to the year is validating the wait-and-see approach the Federal Reserve has taken with raising interest rates.

Business investments, constrained by falling corporate profits and diminishing exports, and held back by the strong dollar, have both played their role in the disappointing start to 2016.

Spending-cautious American households are doing their part to stymie growth. According to figures released by the Commerce Department, retail sales dropped 0.3 percent in March. It was the third straight month without gains in retail spending.

Is This Just a Typical Slow Start?

It’s not uncommon for the American economy to lag behind projections in the first quarter of the year. Gross domestic product (GDP), one of the key measurements of overall economic success, either fell or grew at disappointing rates in both 2014 and 2015. Second, third, and fourth quarters brought much better returns the last two years, and many expect the same to happen in 2016.

Forecasts for the Rest of 2016

GDP forecasters believe the economy will resume recovery throughout the rest of 2016, but growth rates are not expected to be strong. J.P. Morgan Chase has predicted a growth rate of 0.2 percent, while Nomura says 0.7 percent and Macroeconomic Advisers 0.9%.

Following a 1.4 percent growth rate in the closing month of 2015, which itself was viewed as a disappointing figure at the time, Fed officials are likely to remain on the cautious path they’ve already been traveling with interest rates.

In December, the central bank raised the benchmark rate for the first time in nearly 10 years. They have stopped short of further changes due to financial market volatility and global uncertainty. These external forces play a bigger role than domestic economic growth in affecting the central bank’s decisions moving forward.

The labor market has been one source of good news for the economy. Directly following a lull, more than 1.5 million jobs were added over the past six months.

For qualified clients, we provide business funding solutions, single invoice factoring and full-contract factoring for work performed under contract with credit-worthy accounts. We have highly experienced professionals on staff to facilitate the purchase of work in progress and progress billing-related accounts receivable. To learn more, please visit our homepage.